You are here: Home / Tent Camping / Should I sleep in tent under the tree?

Where should I set my tent while camping?

One of the most important parts of camping is selecting the place to sleep. Selecting a suitable place would refresh you in the natural environment while not resting in the right area could leave you with a lot of serious problems! 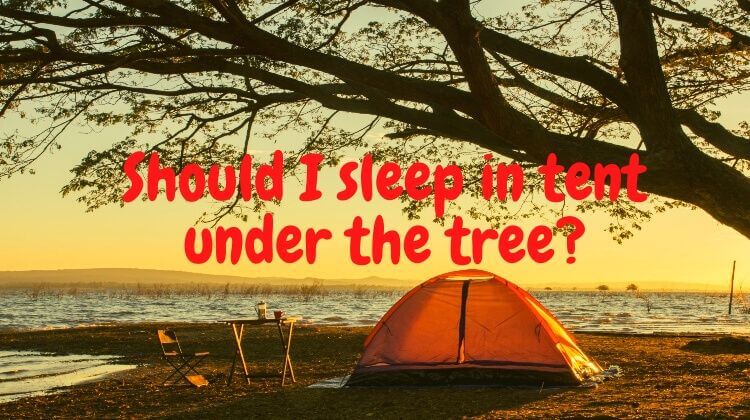 If you want to know about whether you should sleep under a tree or branch, after years of practical camping experience, I think I can help you with that.

Generally, it is better to avoid sleeping under a tree or a branch. It may not be the ideal solution in every situation as different situations demand different solutions.

But during my experience, there was hardly any situation where I had to sleep under a branch or a tree. Let’s dive deeper into the topic and let me explain more about the topic.

Why avoid sleeping under a tree/branch?

Several factors contribute to keeping away from sleeping under a tree. Some of them are:

Heavy fruits can fall on you! Beware to take the view of the tree thoroughly of the tree near which you are planning to sleep!

There are several trees in forests that have fruits high above the ground and it can be really difficult for you to spot them during evening and night times.

Make sure to avoid those trees because I am sure none of you would like to have a jackfruit smashed on you in the middle of a peaceful night’s sleep. Let’s assume that you found out a tree that has no fruits on it or has small berries (which would not smash on you as hard), I bet you will not be able to find a tree that doesn’t has branches!

I don’t think you will be able to check or tell that all of the branches are intact or not about to fall. It can even prove fatal if a heavy branch hits you on a sensitive part of the body such as the head which could cause brain hemorrhages.

Even if it hits you on the limbs or other parts, it can potentially injure you to a great extent and I don’t think you would ever want to camp again. Hence, try to stay away from trees or branches with weak characteristics.

Any animal or bird can harm you!

Before any fruit or branch can harm you, there is a high chance that a sleeping creature in the trees such as a bat can.

If a creature is sleeping in the tree under which you are sleeping, then there is a chance that due to unfortunate circumstances the bird or creature might fall on you!

It could be a dangerous creature and it can bite or sting you and its venom or poison could prove fatal! Such as a bat hanging might fall and bites you, this would cause rabies to you and could kill you eventually.

As you may or may not know that plants feed prepare their food through photosynthesis which uses sunlight. During the day when sunlight is available, it absorbs carbon dioxide from the air to prepare its nutrients. When its night time, only respiration is taking place in the leaves which causes them to give out carbon dioxide. As high levels of carbon dioxide are fatal for humans, therefore, it is advised to avoid sleeping under trees.

The more canopies (dense leafy area) a tree creates, the more are the chances of facing higher carbon dioxide levels.

Although there is a debate about this topic that it doesn’t necessarily harm you, as you know prevention is better than a cure. At least I wouldn’t take any chances out there in that environment. (Source)

Lightning can cause trees to fall!

If you are sleeping near a tree during camping and if you suddenly hear a thunderstorm or lightning, I would advise you to find an area with no trees nearby.

It’s because as many trees have grown very high due to the competition for sunlight, it becomes significantly easier for lightning to get a hold of them. Once struck by lightning, a tree might fall and I don’t think you would be able to save yourself in this scenario.

Moreover, trees can cause lightning to jump over trees to you causing an electric shock! In rare circumstances, a forest fire can also take place. Hence, resting near trees can prove to be a lot of hassle for you!

No doubt rain is one of the most blissful experiences of life but it may not seem so while camping when it can ruin the whole experience such as campfire, water seeping through tents and water currents.

However, if you camp under a tree, then the dripping effect will take place for a long.

Simply put, you will feel the rain even long after it’s gone. It is due to the accumulation of water in the leaves and it spills them overtime. This effect can add to your difficulties hence better to avoid it.

Beliefs about superstitious under trees at night Although there is no such scientific evidence available that superstitious beings interfere with creatures during night times if they are sleeping under a tree, the origin of this belief is in India.

Hindus believe that during the night, if a person sleeps under a tree, then he or she will be pressed down to the ground by a ghost.

However, there is no such evidence available as yet to support this belief but it’s still widely believed by Indians.

Factors to consider when finding a place to sleep

These are the few questions that you might give thought to so that you can have a pre-planned delightful camping trip. However, there are some reasons you might want to camp under a tree such as:

These are some reasons you might want to sleep under a tree but as every situation is different, you have to analyze your situation and come up with the best idea to have the best possible camping experience.