You are here: Home / Camping Games / How to Play the Drinking game of Strip Jenga

Jenga is an intriguing game of blocks which combines both physical finesse and mental skills to make a tower of 54 blocks.

This game is quite tricky when one starts playing it and realizes how much attention to detail the game requires, as the trick is to place the blocks in such a way that the tower does not fall.

Strip Jenga is a block game of building a Jenga tower with two players, at least. The game involves stacking the blocks of Jenga in such a way that the tower does not topple over. Once the tower is built, the game continues with players having to take out Jenga blocks from the bottom levels with only one hand and placing it on the topmost level, making sure the tower stays put.

How to Play the Jenga Game

This game can be played with even just two players. There are no restrictions and people of all ages and genders can play this game.

The game can be modified according to the situation and kind of people involved to make it playable and fun. One variation is the Strip Jenga that has become a drinking game at parties.

Now all you need is a box of Jenga blocks and you are ready to roll.

A standard Jenga board game has 54 blocks that you require to set up the game. One of the players takes the blocks, lays them flat on a floor, table, play mat or any other surface and then starts making a tower out of the blocks. With three blocks in each layer, the standard Jenga tower stands 18 blocks high. 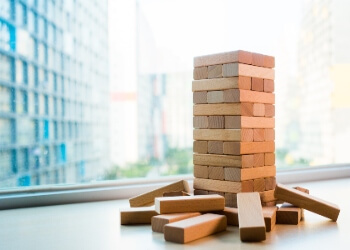 The game starts with the set up when one of the players starts creating the tower. The player puts down three blocks in a line side by side. The first layer of blocks will be facing down.

The next step is to stack three more blocks on them but facing left so that the blocks are at 90 degrees to the previous parallel layer of blocks.

The player then repeats these steps alternatively to make a stable tower of Jenga. Once the tower is standing upright, the game begins. 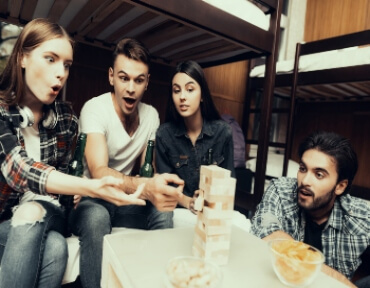 The trick is to successfully pull out a block without breaking or collapsing the tower.

3. The next step is to stack that pulled out Jenga block on top of the already made tower.

4. The player will continue the pattern of three parallel blocks on top of the topmost level.

The blocks are either put face down or to the left, resulting in a stable Jenga tower.

5. These steps are then repeated by all the players involved in the game turn by turn.

6. The players must do it with one hand; although there are variations where people use both hands, the traditional rule requires you to play using only one hand.

7. The game ends when one of the players breaks the tower by pulling out the wrong Jenga block.

Jenga is a great party game, for both adults and kids. Among Jenga’s many variations is Drinking Jenga or Strip Jenga. As the name implies, this is an adult game. The rules are the same with some variation.

So, in Drinking Jenga, the game is made more interesting by writing additional rules on the blocks. The dares range from mild like taking a shot, to medium like a prank call, to spicy like strip a clothing item. Players have to fulfill the dare written on their wooden tile before placing it on the top of the tower. 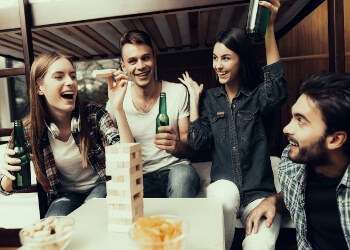 In the mild version, the players who are mostly couples first warm up a bit. Below is a list of ideas or challenges they can put on the wooden tiles.

As the game proceeds, the players become more comfortable and frank with each other. Consequently, the rules become more daring as well. Below is a list of ideas to write on the wooden tiles when playing a medium level of strip Jenga.

The end is closing in, with all the players having had quite a few drinks. The game takes on another level of frankness and the players make even bolder dares. Below is a list of ideas for the spicy level of playing Strip Jenga:

As the strip Jenga game involves drinking, the game can be made more fun by adding a death cup to the game.

It could be mixed with any other beverage or made into a cocktail and in some of the wooden tiles, it could be inscribed as the dare for some players to take.

Also, someone who knocks over the tower by being a little tipsy or otherwise distracted will have to take the death cup.

Drinking can be dangerous if done in excess. Teenagers and even adults should not drink in excess if they plan to drive home. 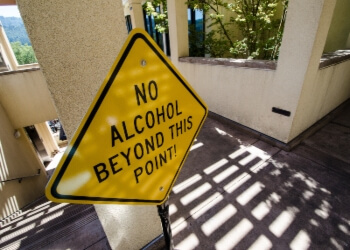 Alcoholics or people with drinking problems should also not drink too much, and those on a sobriety loop should keep away altogether from this version of the Jenga game.

People drink anyway when they get together at a party so why not make a game out of it to have even more fun! If you like Strip Jenga, you will definitely like other similar games such as:

We hope you enjoy Strip Jenga and make fun memories with your friends. Remember to leave your feedback, questions, experiences, and other variations of the game in the comment section below.